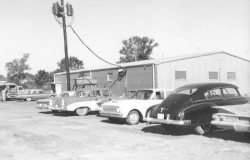 Acquired in October 1962 by Superior Uniform Group, the Worldwide Distribution Center has expanded from 5,000 square feet to more than 220,000 square feet. Originally utilized as a garment production center, the facility is now a state-of-the-art automated distribution center. Centrally located in the middle of the United States, the distribution center regularly ships more than 15 million uniforms to dozens of different countries. A portion of the facility is dedicated to garment customization, and is one of the top ten largest embroiderers in the United States.

“The Superior Worldwide Distribution Center has, and continues to be an important part of our city’s economic development and prosperity. I’m excited to be a part of the fiftieth anniversary celebration,” commented Mayor William Stanton of Eudora. Chicot County Judge Mack Ball, Jr. added, “We are proud to have Superior Uniform Group here in Chicot County. As one of the county’s top employers, it’s not uncommon for several generations of family members to be working alongside each other.”

The Worldwide Distribution Center currently has more than 190 employees; with an average tenure of more than 20 years. This includes 12 employees who have more than 40 years of service, and an additional 36 employees with between thirty and forty years of service. An anniversary event for current and retired employees, civic leaders and other special guests is scheduled for October 13, 2012.

Can’t stand the heat? Now you can still stay in the kitchen
Congratulations NELA on 100 years!