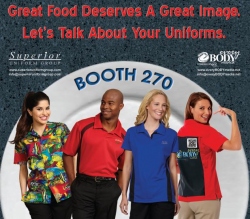 SEMINOLE, Fla., May 1, 2012— Superior Uniform Group®, Inc., (NASDAQ: SGC), designer and manufacturer of uniforms, is showcasing everyBODY media®’s ground-breaking advertising concept for food service uniforms at the National Restaurant Association (NRA) Show 2012.  Executives from Superior Uniform Group and everyBODY media will be available to share the latest innovations in media and image apparel with NRA Show 2012 attendees in Booth 270.

Superior Uniform’s newest division, everyBODY media, launched in 2011 with the concept of combining uniforms and branding, turning uniforms into a highly effective, revenue producing media via a patented interchangeable fabric panel dubbed a Switch-It™.  The Switch-It fabric panels are printed with high quality graphics and appear integral to a garment’s design but can easily be swapped out and rotated based on seasonal promotions, new product launches or other campaigns.

The launch of the revolutionary Switch-it panel and uniform system promptly earned Superior Uniform the title of 2011 Innovator of the Year by Apparel Magazine and everyBODY media was named a 2011 Top Trailblazer by Stitches Magazine.

Incorporated into uniform apparel such as aprons or shirts, the Switch-it panels are eye-catching and visually appealing.  The high-quality graphic design encourages interaction between the employee and the customer, creating an enhanced level of interaction.  By transforming employees into brand ambassadors who are engaged with the consumer, customer loyalty is increased.  The Switch-it panel advertising space can also be presented to brands, and used to generate partnership revenue –offsetting the cost of the uniform garments themselves.

everyBODY media’s Switch-It designs were recently worn by food and beverage employees at the NCAA Champion Alabama Crimson Tide’s A-Day April 14, 2012.  Through a partnership with Learfield Sports and Alabama sponsor Golden Flake, more than 75,000 fans viewed the Golden Flake advertisements on the highly visible Switch-its panels.  The Switch-it panels were placed on uniforms custom embroidered with the Crimson Tide logo.

About everyBODY media®, Booth 270
everyBODY media®, a division of Superior Uniform Group, creates a viable intersection for the uniform and advertising industries; offering image apparel and uniforms containing  patented, flexible Switch-It™ fabric panels printed with promotional messages. The Switch-It system provides opportunities for consumer engagement directly at the point-of-sale.  End-users of the Switch-it system can also generate additional revenue through the sale of advertising.  For information, call 727-803-7142.  www.everyBODYmedia.net .