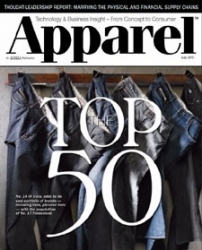 The list, which includes globally recognized brands such as Polo Ralph Lauren®, Nike® and Gap®, is compiled annually by APPAREL magazine.  Ranked by profitability, this year’s APPAREL Top 50 companies are noted for their innovation and an unwavering focus on core strengths in the face of global challenges.

“Our ranking, up two positions from 2010, reflects our commitment to unparalleled service, value and quality, even during a period of global volatility within the textile industry.  Our customers appreciate that they can come to us for innovative image apparel and uniform programs, and also slip-resistant footwear, promotional products and graphic design.  This one-stop-shop approach provides an added level of convenience to our customers.” said Michael Benstock, CEO of Superior Uniform Group.

Superior Uniform Group has also brought technology to the forefront with the addition of their new division, everyBODY media® .  With interchangeable fabric panels, brand messaging and interactive mobile action codes, everyBODY media creates a whole new advertising medium and point-of-purchase shopper experience.  In addition, social responsibility and community involvement continues to be a core value of the company, recognized for their support of local, national and international charities.