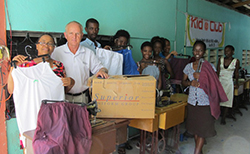 The garments will be used in sewing training centers, which take the adult-sized garments and cut them down into clothing for school age children. After two years, students at the sewing training centers are presented with their own sewing machine.  During their two year tenure they learn to design and produce garments, providing them the opportunity to obtain the marketable skill of sewing.  The training, when combined with the physical sewing machine, ensures these individuals can find employment. There are currently 12 sewing centers throughout Port Au Prince, with missionary groups helping to slowly grow that number.

“We would like to express our thanks to Superior Uniform Group for helping us meet the needs of the poor,” said John Kimball, President of Matthew 25 International.  “This generosity has not gone unnoticed and is allowing us to be ‘your hands’ extended to areas of great need.”

“Superior Uniform Group is proud to support the residents of Haiti by donating clothes and giving its’ citizens the ability to learn a skill,” said Superior Uniform Group’s VP Global Sourcing & Distribution Charles Sheppard. “Supporting these on-the-ground charitable groups in this manner allows our donations to get directly into the hands of those who need them the most. Superior Uniform Group has had a manufacturing presence in Haiti since 2007 and is steadfast in its support of self-sustaining charitable efforts.”