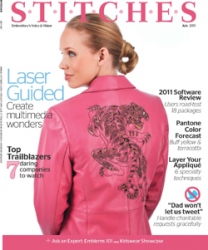 Creativity and originality are integral to success in the apparel decorating business. In this exclusive Stitches feature, we profile companies and individuals whose unique product models, business models and/or decorating methods make them stand out from the crowd. From the niche market online customization business to the digitizer with a special stitch technique, decorators can get interesting ides from these industry originals.

Here’s the scenario: July 4 is a few days away. You’re at the grocery store stocking up on goodies for the barbecue you’ll be hosting, but you can’t remember if you got everything you need. Then a store employee strolls by and you’re reminded you forgot the ranch dip. The reason? You just saw the large promotional message on the back of his uniform advertising the tasty flavor. Before he has a chance to walk away, you whip out your smartphone and scan a trademarked El Tag on the advertisement, linking your phone to an online coupon that saves you a buck on the dip.

If that sounds cool to you, take heart: Seminole, FL-based Superior Uniform Group, a uniform and image apparel manufacturer with a 91-year history, has a new division that will allow this scenario – and thousands like it – to play out in grocery stores, retail shops, restaurants and other businesses everywhere. Launched this year, Superior’s everyBODY media division, through a licensing agreement with Eyelevel Interactive LLC, has wed apparel, promotional messaging and digital smartphone technology together to form a new product that directly marketing to consumers at the point-of-purchase.

Dubbed iPOPS (Interactive Point of Purchase System), the innovative offering consists of high-quality digitally-printed fabric panels (called Switch-Its) that are placed onto the back of customers uniforms through a patented attaching system that allows the panel to fit seamlessly into the garment, says Dan Schwartz, client relations manager at everyBODY media. The panels feature advertisements that can be changed as frequently as desired – weekly, daily, hourly – to feature new brand messages. The panels also display EI Tags ( a proprietary mobile action code) that, if scanned by consumers with smartphones, link the shopper to websites containing everything from product information and coupons to online videos, games and in-store deals. Scanning the codes could, if desired, enter consumers into brand-sponsored contests (“Win a free vacation!”) or award them with loyalty points.

Schwartz says iPOPS connects with consumers in a buyer’s mindset, right at the point of purchase. “These interactive, mobile marketing garments offer our customers a solution to their growing challenges around reaching consumers in a personal way, generating additional revenue and stream lining expenses,” says Superior CEO Michael Benstock.

While retail, hospitality, food service and stadiums are markets where iPOPS is expected to thrive, Superior believes the product’s applications are virtually limitless. “Anywhere you have employee/consumer interactions, there’s a place for us,” says Viv Smith, Superior’s marketing manager.

Earlier this year, Apparel Magazine named Superior a “Top Innovator of 2011” for its launch of everyBODY media. “EveryBODY media provides a viable, digital intersection of the uniform and the advertising industries,” Jordan Speer, Apparels editor in chief, said in a statement.

Tested in pilot programs, everyBODY media’s iPOPS has received resounding praise, Smith says. Being rolled out as of press time, deals were in the works to bring iPOPS into stores all over. “People are really excited about the engagement it creates with consumers,” she says.

iPOPS, seen on the back of the shirt here, are ad-bearing fabric panels with EI Tags that get affixed to employee uniforms by a patented attaching system.