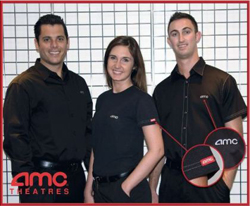 May 12, 2011 – Seminole, Fla–Superior Uniform Group, Inc, (NASDAQ: SGC), designer and manufacturer of uniforms, image apparel and accessories, today announced they were selected as winner of the 2011 North-American Association of Uniform Manufacturers & Distributors (NAUMD) Image of the Year Award, in the Entertainment Category for the AMC Theatres program.  The competition honors excellence in both the design and wear of image and corporate apparel programs.

The Image of the Year Awards honor the best corporate and image apparel programs produced over the last year by North America’s most sought after suppliers and distributors of such designs. The award is the industry’s highest achievement, and is sponsored by the Image Apparel Institute, a division of the NAUMD. “As businesses seek a competitive edge in an uncertain economy, providing employees with a fresh look can be a cost-effective way to appeal to existing and new customers,” noted NAUMD President Richard Lerman in a recent statement.

Distinctive features of Superior Uniform Group’s award-winning AMC Theatres program included a black shirt with silver top stitching.  To differentiate between job roles, a classic look with coordinating variations was created by mixing twill button down shirts for the supervisors, black short sleeved shirts for the bartenders and comfortable knit t-shirts for the crew.  All garments feature the AMC logo so moviegoers can easily identify theater staff.

For more than 31 years, the NAUMD’s Image of the Year Awards has honored uniform manufacturers and distributors that have mastered the concept of fashion and function within image and market planning. Specifically designed to assist in identifying staff and professionals, image apparel can also extend a company’s brand, increase safety, enhance interior décor and improve employee morale. Winners in each category represent apparel programs with distinct purposes or functions within their industry.

About NAUMD
The North American Association of Uniform Manufacturers & Distributors (NAUMD) has served as the voice of the uniform and image apparel industries since 1933. Its 500+ members include manufacturers, designers, producers, and retailers of uniforms, as well as those who produce products and services for the industry at large.